Around December 2014, I went to visit the families in their homes.  This is something I do every November/December for families in the program.  I see their homes, their living conditions, weigh each child and get updated shoe and clothing sizes; I’ve also started taking height measurements.  I remember one visit fairly clearly.  It was the family of one of the widows in our program.  They knew we were coming, but when we got there, only the two school-aged children were there.  Manuel--my community contact and translator--and I chatted with them for a while.  When it was obvious their mother wasn’t going to show up, we gave them their Christmas gifts--cookies and a Bible--and prepared to leave.  For some reason we asked the boy if he could read, and he said no.  I double checked my records; the boy had just finished second grade and couldn’t read the words “Santa Biblia” (“Holy Bible”).  We thought it strange and mentally put some blame on the mother for not being involved in her children’s studies.  To be fair, the kids would skip out on their way to school and spend the day playing; so we felt blaming her was justified.

Fast-forward to June 2016, and we’re looking at the report card of a first-grader in that same village. 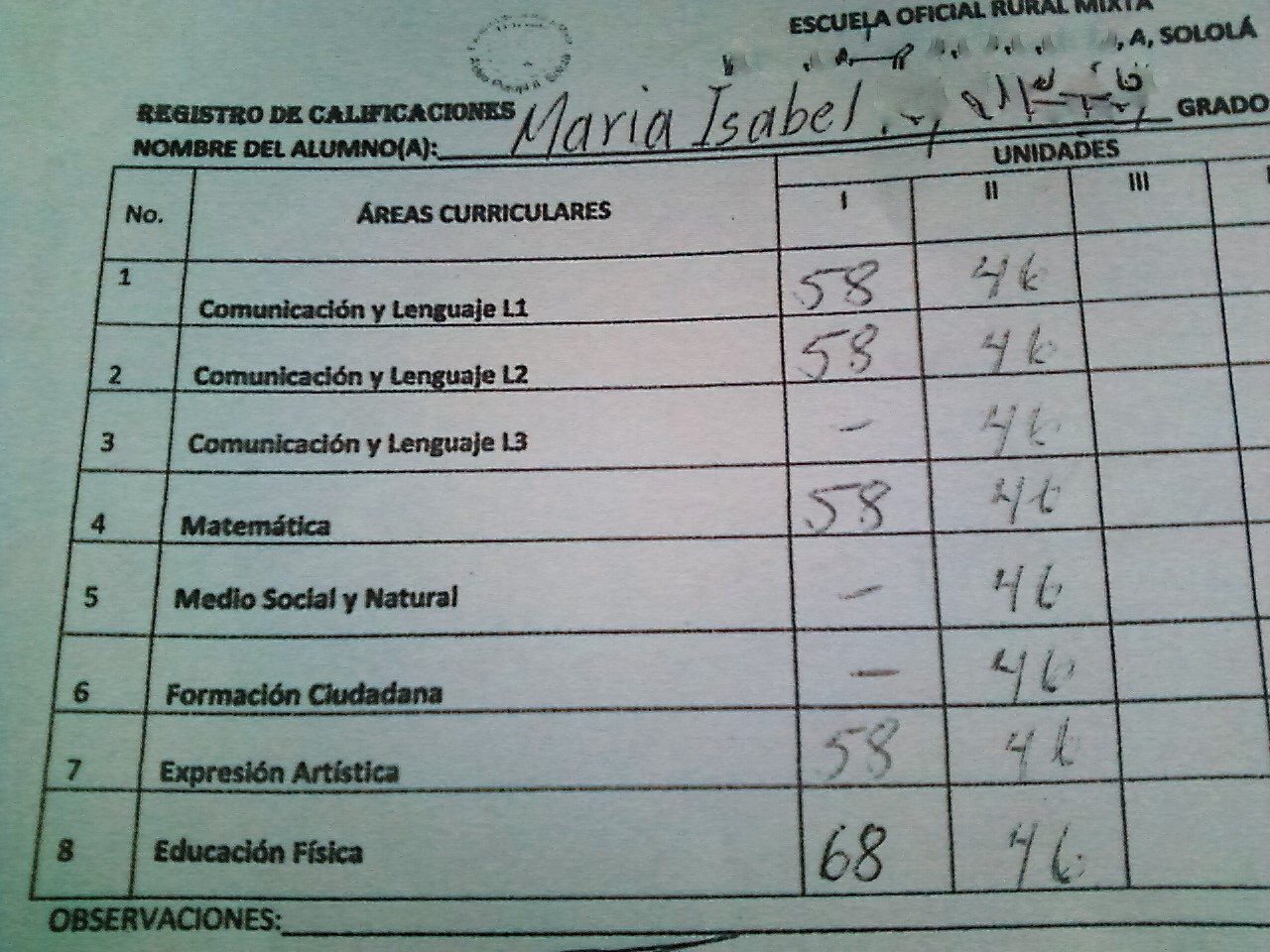 During 4 marking periods, students have to have an average of 60 point in each of their classes.  (If they have below 60 in up to 2 classes, they can take a make-up exam covering material from the entire year; if they have less than 60 in three or more classes, they automatically fail the year.)  So, you can see from the picture why we were concerned about Maria Isabel’s grades.  We asked her mother why she got a 46 in every single class this marking period, and she said that she had asked about that.  We were instantly happy that this mother had at least been proactive about her daughter’s education.  She said that the teacher had “gifted” her daughter these grades because the teacher says that Maria Isabel cannot read or write.  First of all, did you all catch where I said this girl was in first grade?  Isn’t it part of the teacher’s job to teach these kids to read and write?  Maybe it’s slightly different in the US where there’s a higher level of literacy, but since most of the mothers and a few of the fathers in the program are illiterate--and they tend to be a good representation of their communities--it stands to reason that that responsibility would fall 100% on the shoulders of the teacher.  Second of all, did you see that last class?  It’s Physical Education.  Since when does reading and writing have anything to do with how well you can run around cones forward and backward?  How can we set these kids up for success when their own teachers aren’t doing their jobs?  How do I convince a sixth grader (and his or her parents) to continue studying when the educational system has completely failed them?

These are the questions I’m struggling with right now.  We told the mother to take the report card (or copy of it, rather) and talk to the principal, the advisory board, her community leaders, whoever would listen.  If they won’t listen to her (and her husband), then Manuel and I might take it up with the mayor.  We never inquired about these weird grades with Luis (the second-grader) because we assumed it was related to him not going to school half the time, but now I feel like we should have.

In other news, Manuel and I are looking into other possibilities for purchasing food supplies out in the Solola area. I’m also planning on spending about a week and a half with a family out in Solola to study Kaqchikel and coming home for four days and repeating that process until I learn the language.  It may deviate a little from that plan when it is put into implementation, but for now that’s what we’re planning.
Posted by Annalisa at 2:58 PM No comments: Links to this post

Annalisa
My name is Annalisa, and I have been a full-time missionary in Guatemala since October 2010. I originally came to teach massage therapy to the people, but they requested that I teach English instead. In 2013, I started Educacion con Esperanza to which I dedicate the bulk of my time.